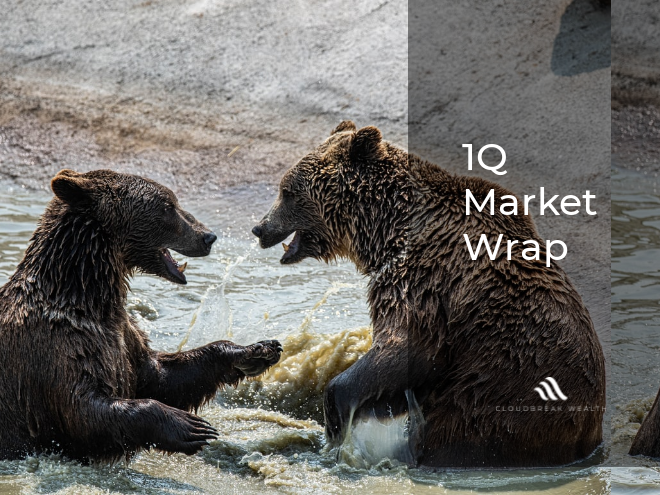 There were several factors at play in the first quarter this year around the world that saw equity markets sell off. Not least of these was the Russian invasion of the Ukraine – more on that below. Secondly, the US Federal Reserve raised the target fund rate for the first time in three years. Both significant events were against a backdrop of soaring inflation and a market that had been running hot, so it’s not surprising to see the market take a breather, particularly in the US.

The market returns above don’t tell the full story of the last quarter. The Australian market was at one point down 9.6% from the high in December to the low in January; the S&P500 was down 10.6% (technically this constitutes a correction – down 10%); and the NASDAQ was down 20.6% from the November highs to the lows in January. Technically this is a bear market (down 20% or more) but you wouldn’t know it. The recovery in each of the indexes has been swift again.

It’s important to remember that one quarter, in the context of investment markets, is a very short period of time.  For this reason, I’m always reluctant to read too deeply into quarterly market moves.

Clearly, the most significant macro event of the quarter was the Russian invasion of the Ukraine. In addition to the initial shock reaction by markets (selling off), one of the biggest impacts has been of that on commodity prices. Russia is a relatively large producer and exporter of commodities, so the invasion sent prices skyrocketing. Thermal coal was up 23% in February alone. This has added further fuel to the inflation fire.

If you’re looking for a source of concise information on the conflict, see link: https://www.cfr.org/global-conflict-tracker/conflict/conflict-ukraine

Inflation is still far higher than target rates set by central banks the world over. To give an idea, the long-term target for the US Federal Reserve is 2% and this compares to the most recent reading (March) of 8.5%! https://www.bls.gov/cpi/ Equally alarming is the trend, and the rate of the increase in the inflation rate. The Federal Reserve needs to take swift action to curb this, and markets are looking ahead to this. At the start of the year markets were pricing in three rate hikes each of 0.25% for 2022. Markets are now pricing in between eight and nine rate hikes for 2022.

While the numbers aren’t quite as concerning in Australia, there’s no question inflation is still too high. The last Australian release (today) had the official inflation rate at 3.7% and this compares with the target rate of between 2-3%. https://www.rba.gov.au/inflation/inflation-target.html That’s also rising from the previous quarter which was 3.5% and the quarter before that at 3%. Some are predicting a rate rise in Australia as early as next week. Personally, I don’t see why the RBA have waited this long to raise rates. It’s crystal clear that rates need to rise – inflation is everywhere and almost every business you speak to is experiencing it at both ends of their transactions.

The first quarter also sees the February reporting season which was actually fairly strong in Australia. However, most of the heavy lifting was done by financials and commodities, both of which comprise a decent chunk of the ASX200.

There is no question that there is enough uncertainty in the world at present to make investors nervous. In addition to the factors detailed above, there are also fresh fears of further covid-related shutdowns in China, and what this may do to supply chains, productivity and global growth. How the market reacts to any and all of these concerns in the short-term is anybody’s guess. What we do know, however, is that we want to be greedy when others are fearful. As long-term investors, fear (in others) is our friend, as it’s when the bargains present themselves to us. Or to paraphrase Warren Buffett, market sell-offs are when shares are returned to their rightful owners!

So with likely increased volatility, as investors this excites us. At these times, discipline and strategy pay enormous dividends. In portfolio reviews we often speak about resilience in portfolios, and this is certainly a focus at present. Resilient cashflows in businesses with solid moats and high-quality management teams. Sticking to these principles will hold us in good stead regardless of market conditions, but will reward us handsomely when the market turns.

Until next quarter – onwards and upwards!