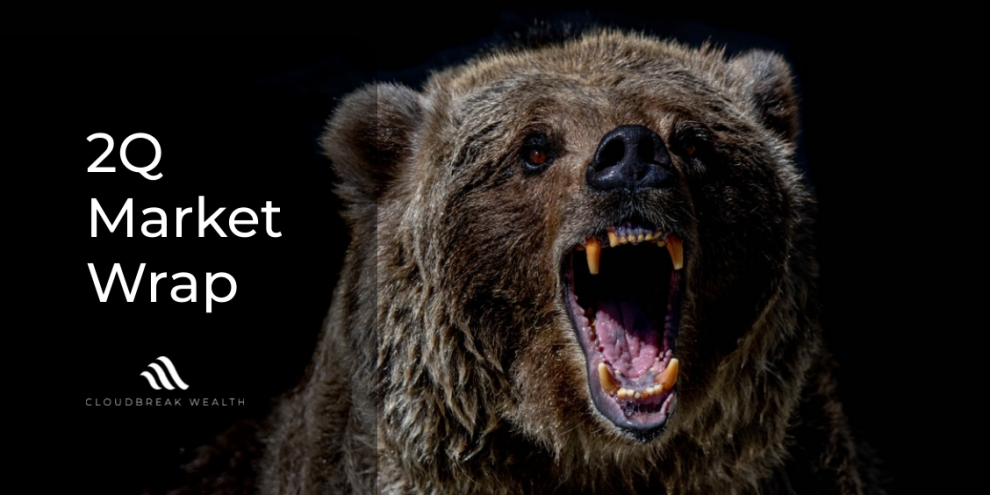 The first six months of 2022 have been brutal for global financial markets, with equity markets recording the worst six-month start to a year since 1975. It’s no exaggeration to say we have just endured one of the worst six-month periods ever. The only worse six-month periods on record are the Great Depression, the 1937 crash, World War II, the 1970s bear market, the dot-com bust, and the GFC. So, if you can get through that without panicking, you’re doing ok. Australia fared better than most of the rest of the world but is still down almost 12% for the year so far.

“If you can’t stomach 50% declines in your investment, you will get the mediocre returns you deserve.” – Charlie Munger

As we all know, six months (and especially one quarter) is a very short period in markets. But this is a quarterly report, so for the most recent quarter, market returns were as follows:

Compounding the collective pain in investment markets was the fact that bonds were no safe haven from the selling. For the first time in 48 years, both stocks and bonds fell in the same period. US 10-year Treasuries are down 9.4% for the year, making it one of bonds’ worst years on record.

Given the carnage we’ve just been through, it makes sense then that expected returns are now significantly higher than they were at the beginning of the year. P/E ratios have contracted and suddenly there is good value again on markets.

Typically, when a market turns, those companies that had been sailing too close to the wind (e.g. fragile balance sheets, high cost of borrowing, flat or deteriorating earnings, etc.) are exposed and share prices reflect this. We saw this late last year, especially in small caps. However, when the selling becomes indiscriminate, this is exactly when you want to go shopping. High-quality companies get discounted for no other reason than that everything is getting sold. This is what we are seeing now.

From here, there is no guarantee that the market won’t go down further, and there are several reasons why the market will remain volatile. However, history tells us that real wealth is built during bear markets.

The last quarter saw the first official interest rate rise in Australia since 2010, coming out of the May RBA meeting where we went from a record low 0.10% to 0.35%. The following month saw a 0.5% hike to 0.85% and the July meeting saw a further 0.5% increase to 1.35%. The RBA has not raised rates at such a velocity since 1994 when inflation was also high, but not as high as it is right now. (For more on inflation, see https://www.rba.gov.au/inflation/inflation-target.html) The interest rate swap curve tells us that the market is pricing in further rate hikes from here as central banks try to bring inflation under control. However, input costs look to be coming down already – see below.

Many would argue that central banks were slow to get in front of inflation. As we’ve discussed in previous quarterlies, going back as far as late 2020, inflation was everywhere. We had central banks pumping money into economies which was also driving prices higher. Finally, early this year Jerome Powell (Chair of the US Federal Reserve) acknowledged that inflation was not transitory, as had been their prior view. The Fed then began their rate hiking and the RBA followed in May.

However, we are now seeing signs that inflation may have peaked. The price of semiconductors – a major input into any finished electrical product – looks to have peaked in December 2021 and has now fallen 40% since.

Secondly, fertiliser prices – a major input cost into food production the world over – look to have peaked in March/April and is 30% lower.

Thirdly, and probably the broadest indicator of the three, is that the spot rate for shipping containers also looks to have peaked. Current rates are about 40% lower than they were in September 2021.

So, while central banks may have been slow to act, it would appear that supply-side pressures may be abating. This would help to lower inflation and may see a slowing of the interest rate rises. This would be well received by equity markets.

Given the significant correction the market has been through (technically a bear market in the US), the outlook for equities from here is considerably rosier than it was this time last quarter. No doubt the market will continue to be volatile for the next few months at least. July and August sees reporting season in the US and Australia which will give us insight into corporate performance and outlook. Typically, share prices fall before corporate earnings fall, and they recover as earnings cuts slow. So this reporting season will be interesting.

However, we are much closer to the end of the rate-rising that had to come, and value is emerging. Have we seen the bottom? It’s impossible to say. But we are now at a point in the market where everything is on sale. These opportunities don’t present themselves every day, and as long-term investors we should take advantage of the present situation.

Until next quarter – onwards and upwards!

General Advice Warning: Any advice given herein is general in nature and has not taken into consideration your personal financial objectives, situation or specific needs. You should consider the appropriateness of the advice as it relates to you before acting upon it. Always consult the relevant Product Disclosure Statement before making any investment decision relating to a specific product that has been mentioned.